The Preimplantation Genetic Test (PGT) detects and prevents the transmission to the offspring of serious diseases caused by genetic and chromosomal alterations in embryos, before their implantation, to ensure that children are born free of hereditary diseases. 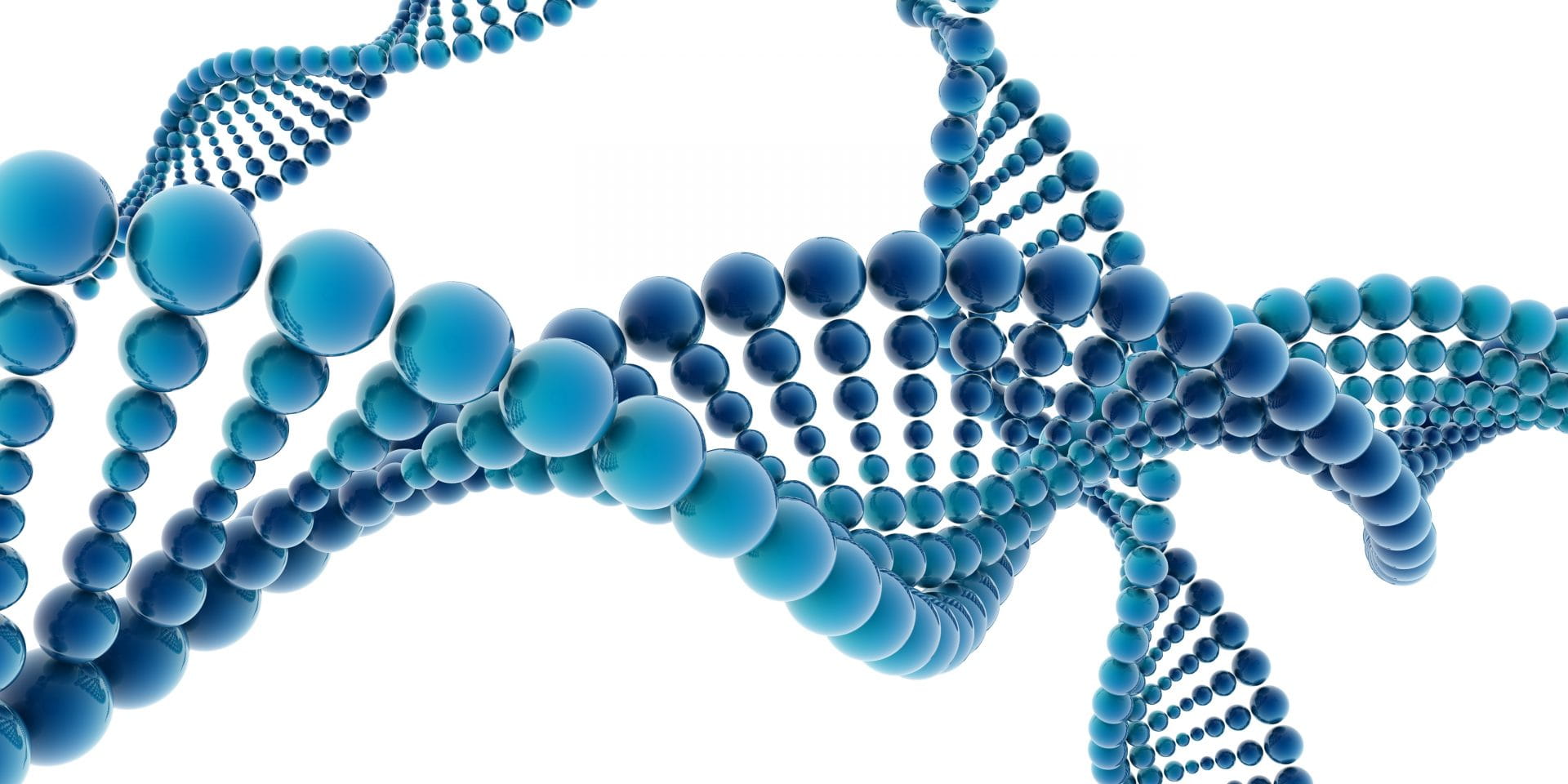 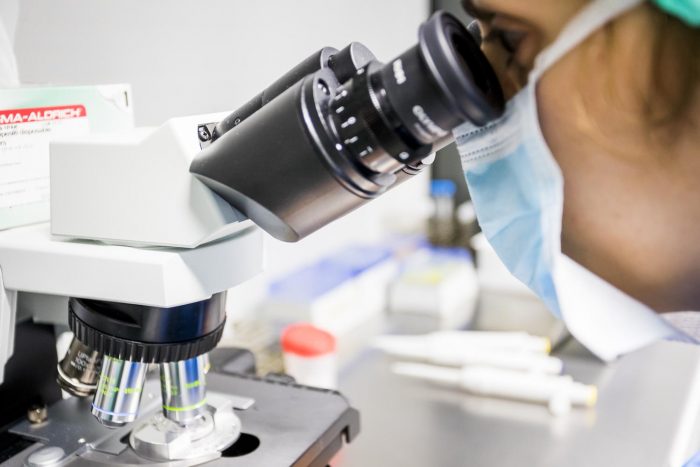 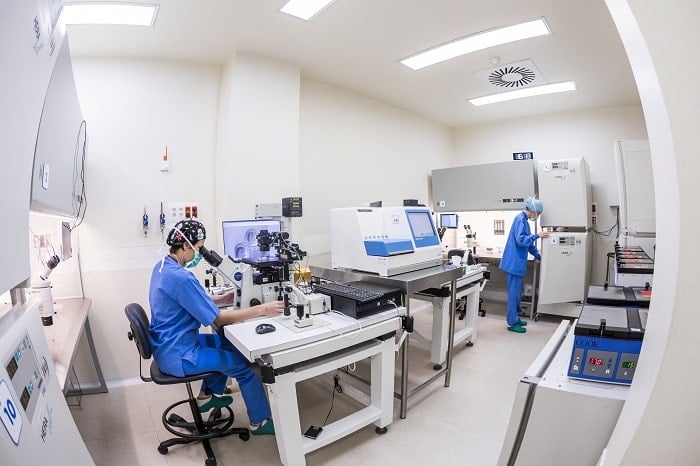 The Preimplantation Genetic Testing detects and prevents transmitting severe hereditary diseases to the offspring, caused by genetic and chromosomal abnormalities of the embryos, before those are transferred to the uterus. It also prevents transferring embryos that cannot lead to a pregnancy. There are three variants of Preimplantation Genetic Testing, depending on the type of problem to be detected.

What are chromosomal and monogenic abnormalities? 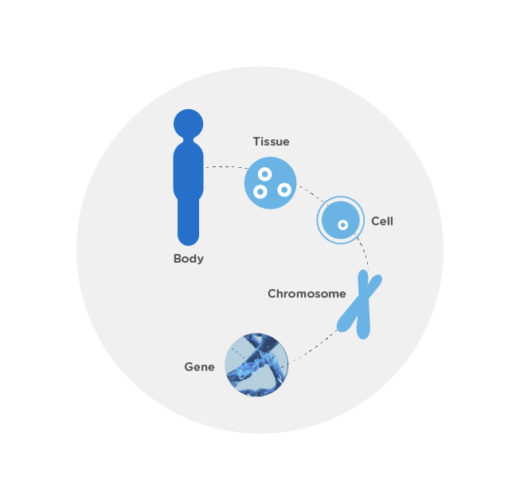 Chromosomes are structures found in the interior of every cell, containing genetic information – our DNA. Genes, in turn, are DNA segments, which contain information about how the cells of an organism should work. A human being has 23 chromosome pairs: 22 pairs of autosomes and one pair of sex chromosomes (XX in the case of women and XY in men).

When an egg gets fertilised by a sperm cell, each parent contributes with one chromosome from each pair, in accordance with the laws of heredity.

However, sometimes changes that may result in a genetic alteration take place. There are two types of those chromosomal abnormalities: numerical, when there are extra or missing chromosomes, and structural, when a part of a given chromosome is missing, bigger, got transferred onto a different one or is inverted.

In other cases, the mutation occurs within a specific gene and that affects the functioning of the body, leading to a disorder. These diseases can be transmitted to the offspring in various ways.

90% of patients who undergo an assisted reproduction treatment at IVI become pregnant.

97% of our patients recommend IVI.
IVI provides personalised care and support during all stages of treatment.

IVI is a pioneer in the latest assisted reproduction technology in order to present the best results.

We are not the most expensive choice. We offer the most treatment options in order to achieve the best results.

What types of PGT are there and when are they recommended?

The number of chromosomes of this cell (karyotype) is normal, a total of 46 divided into 23 pairs: 22 autosomes and 1 pair of sex chromosomes. If it is an XX, we are talking about a female, if an XY, about a male. 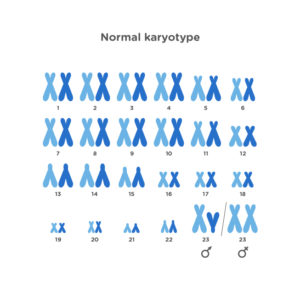 However, the chromosome number of this cell is altered, as instead of 46 chromosomes it has 47, because the pair number 21 contains three copies instead of two, which indicates the Down syndrome. 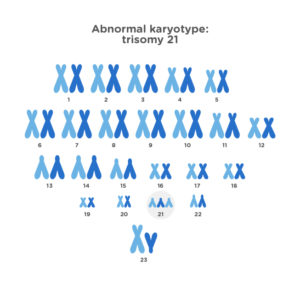 It allows for detecting alterations or mutations of a single gene in the embryos, which may cause a monogenic disorder, also called Mendelian inheritance. The test analyses different types of hereditary diseases: autosomal recessive, autosomal dominant and X-linked disorders, such as cystic fibrosis, Huntington´s disease, Fragile X syndrome, hemophilia A, sickle cell anemia or the Mafran syndrome.

In the case of autosomal dominant disorders, one of the parents carries the affected gene and suffers from the disease (the male in our example). The female´s gene is unaffected. 50% of their offspring will be unaffected and 50% will inherit the mutated gene and therefore suffer from the disease.

On the contrary, while dealing with autosomal recessive disorders, having just one of the affected copies of the gene does not translate into suffering from the disease, but into being a carrier. To suffer from the condition, both the maternal and the paternal copies must have the mutated gene. In this case, 25% of the offspring will be unaffected, 50% will become unaffected carriers and 25% will be affected by the disease. 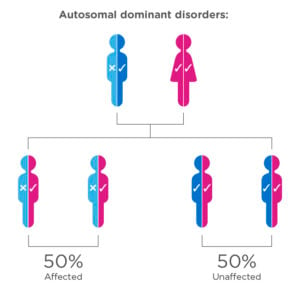 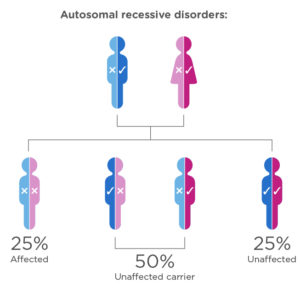 Translocations: occur when two segments of one of the chromosome pairs break off and change places. In this case, the change does not affect the genes of this chromosome and they can keep working well: it is balanced.

In the following example, two segments of two chromosomes break off and change places. However, there is a gain or loss, as the case may be, of the genetic material in the chromosomes: it is unbalanced.

In the last example, a fusion of two acrocentric chromosomes (with one arm only) occurs at the end of the arm, which increases the risk of trisomy of the involved chromosomes. 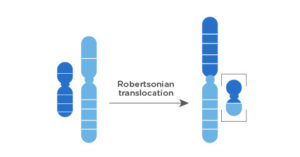 Deletions: a chromosome segment, on breaking and trying to reconstruct itself, gets lost and so, the genes in the area are affected.

Duplications: a segment of a chromosome duplicates, resulting in extra genetic material in the area. 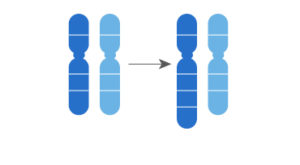 Insertions: a portion of the chromosome has detached from its usual location and reattached to another chromosome. 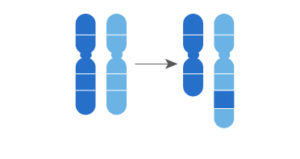 Rings: a segment of one of the chromosome pairs breaks off at the ends of both arms and tries to repair itself by rejoining the other parts, forming a circular structure. Two fragments are left out during the reparation and thus, lost. The genes found in the original chromosome cannot function properly, which leads to a disease.

Inversions: a portion of the chromosome has broken off, turned upside down and reattached. Depending on the type, the union can result in a repaired (balanced) or unbalanced rearrangement. 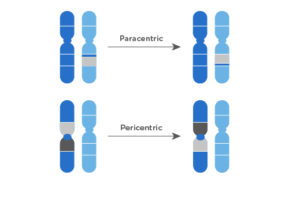 What does PGT involve?

Every PGT type has its peculiarities, but all of them require an in vitro fertilisation cycle for the genetic screening of the obtained embryos.

Therefore, after the first appointment with the gynaecologist, the cycle starts with the period. After 15-25 days of controlled ovarian stimulation, it is time for the egg collection (follicular aspiration). Once the eggs are fertilised with the donor´s or the partner´s sperm if possible, the embryos are cultivated until the blastocyst stage, that is, 5 or 6 days after their collection.

At that moment, a small number of cells of each and every embryo is extracted, a technique called embryo biopsy, and those are processed in preparation for their genetic screening. On the same day, the biopsied embryos are frozen (vitrified) as we await the results.

Once the results report is available, which depending on the test type may take 10 days (for PGT-A), or 10-15 days (for PGT-SR and PGT-M), the uterus of the patient is prepared for the transfer. When it becomes clear which embryos are eligible for transfer (as they are chromosomally normal and/or free of the genetic disease in question), one of them is devitrified and transferred into the maternal uterus. The remaining embryos will stay frozen for their possible future use.

The particular case of PGT-SR for detecting structural rearrangements may require a prior study of translocations, which takes between 30 and 60 days, depending on the chromosomal abnormality. The rest of the process is very similar. 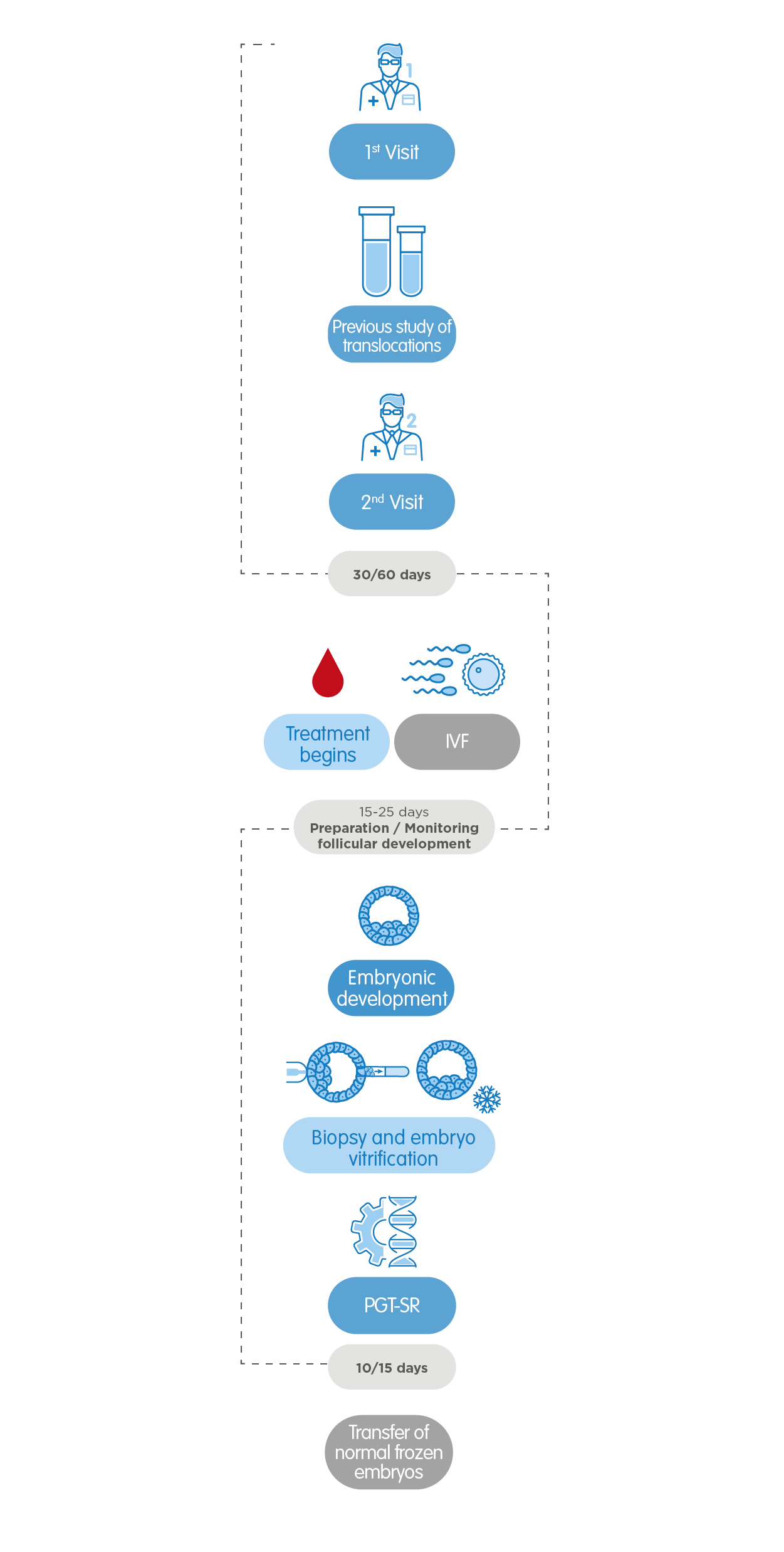 Lastly, in the case of PGT-M for detecting monogenic diseases, a prior Informativity study is necessary to provide us with information on how to proceed in every specific case. The duration of this phase varies between 6 weeks and 4 months, depending on the altered gene. Drafting a specific protocol on the disease to be detected might result necessary and prolong the process up until 3 months more. In any case, the patients will be guided by our specialists at all times, ensuring that the whole process is carried out in a trustworthy manner and the patient is well taken care of. 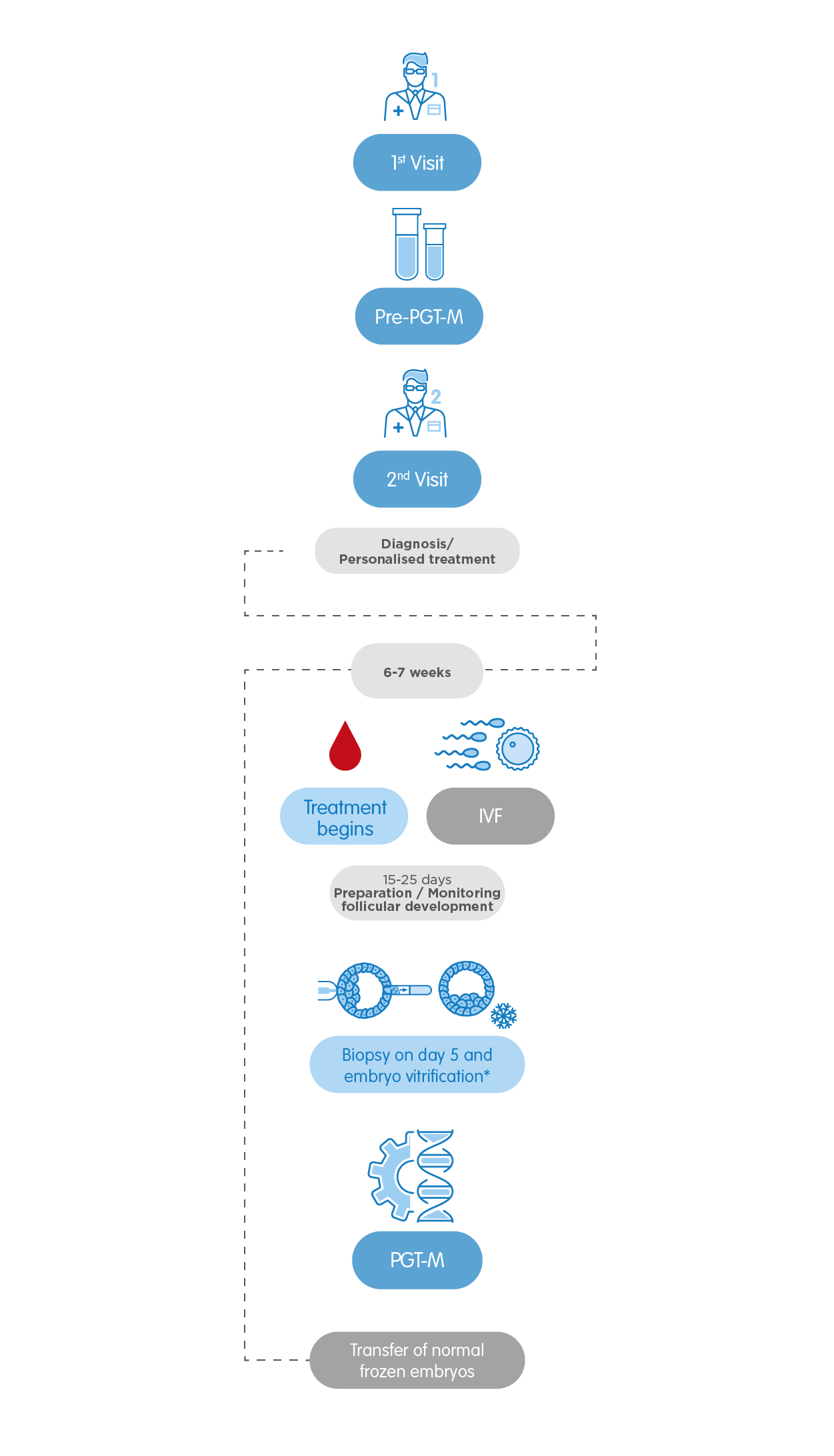