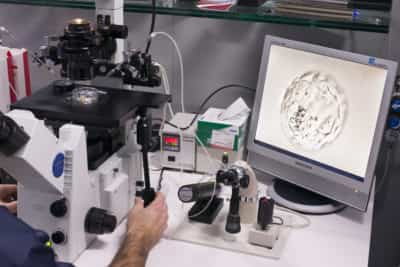 Today marks the end of the 75th Congress of the American Society for Reproductive Medicine (ASRM), an event at which hundreds of professionals in the field of reproduction came together to share the latest advances in reproductive medicine.

Among these, we would like to share two studies with you that we presented at this congress and that bring us closer to the goal that we have been pursuing for almost 30 years: achieving full-term pregnancies resulting in healthy babies.

In this respect, the latest research into the chances of getting pregnant through obtaining normal embryos and the guarantees associated with the use of preimplantation genetic tests such as PGT-A provide optimistic results for achieving our goal: to offer patients the greatest possible security and confidence on their road towards becoming a mother or a father.

We now know, thanks to the study headed by Dr Paul Pirtea, a fellow of IVI in New Jersey, that women and couples who obtain 3 normal embryos in their IVF treatment have a 95% chance of becoming pregnant.

“These findings prove something that we had already believed for years, and that is that aneuploid embryos, i.e. ones that are not chromosomally normal and have chromosomal alterations, are the main cause of recurrent implantation failure and, therefore, of failure when it comes to achieving a full-term pregnancy. Improvements in IVF rates thanks to preimplantation tests such as PGT-A allow us to fine-tune embryo selection as much as possible, reducing multiple pregnancies and at the same time increasing the chances of implantation, full-term pregnancy and a healthy new-born baby,” comments Dr Juan Antonio García Velasco, Director of IVI Madrid.

Tests such as PGT-A, the ideal choice for achieving viable pregnancies

Another of the research projects presented in the congress, led by Dr Ashley Tiegs, a fellow of IVI in New Jersey, describes the use of preimplantation genetic tests, such as PGT-A, which help to pinpoint embryos with anomalies that, in the majority of cases, lead to miscarriage or implantation failure.

The study shows how out of the 285 embryo transfers, all of which were analysed using the PGT-A preimplantation test for detecting aneuploidies, of the 50 embryos on which a biopsy was performed that showed abnormal results, none gave rise to a full-term pregnancy.

“To all this we can add the fact that the implantation rates were the same for the embryos that were biopsied and those that were not, which indicates that embryo biopsy does not harm embryos, nor does it have a negative impact on implantation rates for these, which is something that in the past has been a constant cause for concern among the scientific community and among patients themselves,” explains Dr García Velasco.

The reliability of this research is based on the fact that it is a blind study, which means that neither the doctors nor the woman who took part knew the result of the test performed on the embryos prior to their transfer.

The research is still in its very early stages, but it is hoped to be able to extend the sample of embryos for analysis, and as such turn it into the only large-scale study looking at the predictive value of aneuploidy diagnosis that has been carried out to date. This will help to shed light on the scientific debate concerning the reliability of genetic testing.

“Patients should continue to trust in preimplantation tests such as PGT-A, and be secure in the knowledge that when an embryo is labelled as abnormal and is not transferred, that embryo is not rejected in error. The PGT-A test provides rigorous and reliable data and saves patients time, money and emotional distress, giving them confidence in the transfer of normal embryos, with a high probability of going on to have a healthy baby,” concludes Dr García Velasco.

PGT-A is one of the tests that has led to the most improvements in IVF, consequently increasing the rates of single embryo transfer (SET) and substantially improving the results of these. SET, in turn, has made it possible for the risks associated with multiple pregnancies and births to be significantly reduced, as a result bringing birth weights among babies born through IVF into line with those born from natural conception.

Figures for IVI at the ASRM

In the most recent edition, IVI presented 66 works: