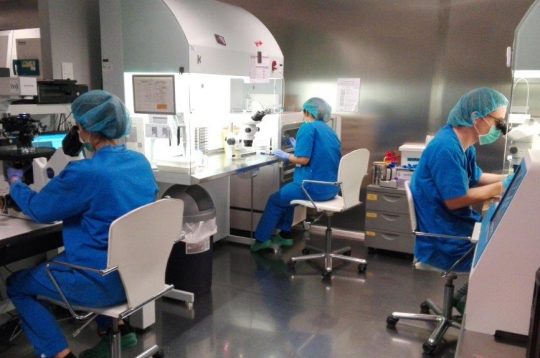 Within the framework of the 73rd Congress of the Annual Congress of the American Society for Reproductive Medicine, IVI has presented a study that provides evidence that environmental pollution inside IVF laboratories may have a negative impact on embryos. This type of research has never before been conducted in humans but in other mammals.

The study was focused on two of the main air components that persist in the IVF lab environment, such as benzene (at user level, it is found in tobacco smoke, industrial and car emissions. Inside the lab, certain glues, plastics or even furniture, among others, may also contain benzene) and limonene (it is found in detergents, perfumes, deodorants, moisturizers and makeup, etc.).

Concentrations of environmental pollution found in IVI laboratories were minimal (at levels far below daily limits for pollutant exposure in general population), therefore, these do not represent any danger for humans. However, to date, concentration limits were unknown in the case of human embryos, hence the decision to conduct this study that IVI has presented during the ASRM meeting.

According to Dr María José de los Santos, IVF laboratory Director at IVI Valencia and one of the principal investigators involved in the study, “we have tried to artificially create environmental concentrations, measured in parts per million, on an experimental basis. These particles were transferred into the embryo culture media in order to determine if the excess presence of these pollutants may be damaging. The initial approach was, on the one hand, to identify which concentration levels (even in small amounts) may be harmful to embryos, and on the other hand, to calculate daily limits for such pollutants”.

The study conclusions show that both limonene and benzene have a deleterious effect on the embryos. Limonene has a greater impact on embryo development, this means, that the higher the exposure, the less chance of reaching blastocyst stage. In turn, exposure to benzene affects embryo development but to a lesser extent. However high levels of benzene impact chromosome constitution, which may give rise to abnormalities that would translate into miscarriages and implantation failure, for example, following embryo transfer.

In order to conduct the study, IVI required the approval of the Spanish National Commission on Assisted Human Reproduction. Three types of concentrations of volatile compounds in air were used in the study (concentrations found outside the IVF lab, those found inside the lab and double amounts of the compounds that are usually found in an IVF lab).

As Dr de los Santos explains, “among the measures to be taken in order to control concentrations of particles and pollutants, a reduction of benzene and limonene levels inside the lab is recommended. Thus, the implementation of filters in the heating ventilating and air conditioning equipment is essential, or alternatively, use specific devices that would collect particles and convert them into carbon dioxide and water. At IVI, every lab is equipped with activated carbon and potassium permanganate filters to generate particles. The most effective way to control those particles is to apply positive pressure, this means, to try to eliminate all the particles in the air with such pressure”.