Fertility preservation between 25 and 35 increases the chances of success 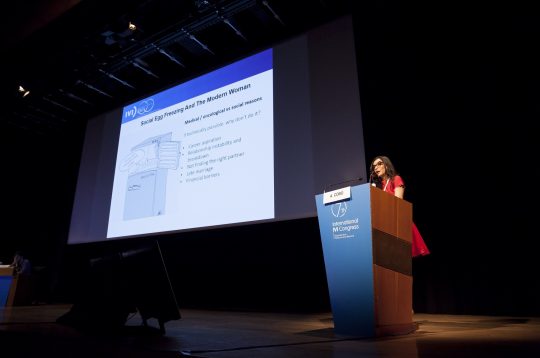 Nowadays there is an increasing trend of delaying motherhood that is forcing professionals in the Assisted Reproductive Technology field to adapt to such reality. In these cases, oocyte vitrification is known to be the most common technique for delaying pregnancy, either for social reasons or for oncological reasons. However the age at which women decide to vitrify also affects.

Women are born with approximately 1,000,000 oocytes, and when puberty is reached and menstruation begins, only about 400,000 follicles remain, from which almost 1,000 are lost in each menstrual cycle. “Therefore, from the age of 35 onwards, the ovarian reserve represents a 10% and oocyte quality decreases. We have cases of women of 40 who hardly produce good quality eggs to conceive a child with no reproductive failure and/ or chromosomal abnormalities. Researchers from the St. Andrews University have estimated ovarian reserves of 3% for these women”, has affirmed Professor José Remohí, co-president and founder of IVI, during the 7th International IVI Congress. “The maths tells us, and we as gynaecologists are fully aware, that a female’s fertility is not infinite. Women should become more aware of that. It is true that spontaneous pregnancies can occur without treatment, however this is very unlikely to happen and if it does, it won’t be without risks”, points out the doctor.

Keeping your Maternity below Zero

Oocyte vitrification was seen as a sign of hope for women undergoing cancer treatment or ovarian surgery, and nowadays, it is a treatment option for an increasing number of women due to social reasons. The method involves ultra-fast “freezing” that allows for optimal conditions to preserve the oocytes, which will be used whenever the woman decides to become pregnant in the future. Thanks to the advantages used by the specialists at IVI, oocyte survival rates reach 90%.

“Vitrification is a simple procedure that has revolutionised the field of Cryobiology and has become a well-established and widely used routine procedure for many other treatments performed in our clinics. It offers a high success rate, along with a reasonable cost. It is a decision with more advantages than disadvantages. If we focus on the final goal (leaving maternity almost intact), then it is highly advisable. It brings hope and provides control of a woman’s time, body and maternity wishes, if any”, explains Dr Juan Antonio García-Velasco, director of IVI Madrid and speaker at the 7th International IVI Congress.

Age is crucial for Assisted Reproductive Treatments. It has become the main factor in the problems affecting those women and/or partners who are struggling to get pregnant naturally. “Delayed motherhood is a reality. And so it is that women have their best social, emotional, psychological and economical status by the end of their 30s. But this is something Biology does not understand. Biology has its own pace and tells us that the best age to become a mother is not that one. Therefore, preserving their fertility through oocyte vitrification at that optimal time gives all of them some peace of mind”, outlines Professor José Remohí.

Although oocyte vitrification after the age of 35 is still possible, women must be aware that the sooner they think about vitrifying their oocytes, the better, as this will definitely increase the chances of success in the future. “Today IVI offers cryopreservation programmes that are effective and safe, and we are certain that they will lead to the expected result. However, the age is essential. Fertility preservation between 25 and 35 is the most optimal option. Even though the survival rates are similar, the pregnancy rates decrease when the oocytes were vitrified at a later age, as it is the case with fresh oocytes too”, explains Dr Ana Cobo, Director of the Cryopreservation Unit at IVI Valencia and speaker at the session entitled “Factors impacting the success of elective fertility preservation”, which will be given during the conference.

The social reasons have become popular at present, however we must not forget that fertility preservation started as way to help preserve the possibilities to become a mother/ father after cancer treatment. In this sense, the 7th International IVI Congress has presented the latest advances in paediatric patients with cancer, when they have not reached their fertile age yet.

Along with the study of survival rates, the scientific community is working to avoid or decrease the consequences that cancer treatment may produce in these patients in the future. The cases that have been studied so far show higher success rates in girls than boys. “For those cases, the most commonly used technique is the cryopreservation of ovarian tissue. Births have been achieved in female patients who had cancer during childhood and preserved their fertility. No cases have been reported in Spain, but at least it gives hope to similar patients”, concludes Dr Juan Antonio García Velasco.