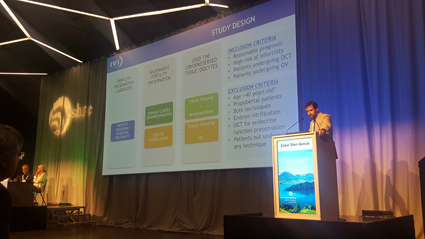 IVI was one of the world’s pioneers of oocyte vitrification for fertility preservation, a technique they have successfully used since 2007. Furthermore, in 2012, IVI started to share a common flow of patients with La Fe Hospital of Valencia. Thanks to that, both institutions have been preserving the fertility of their patients, introducing the cryopreservation of ovarian cortex since then.

A recent study, conducted by IVI and La Fe Hospital of Valencia, with a study sample of 1,759 patients (1,024 oocyte vitrification cases and 735 ovarian cortex cryopreservation cases) shows no significant differences in live birth rates, which means that both techniques are similarly effective. From the total number of patients who had undergone fertility preservation, the study included those who used the vitrified material to try to become pregnant.

The study, whose results have been presented today in Geneva during the 33rd Annual Meeting of ESHRE, compared the results obtained by those patients who thawed oocytes with those obtained by patients who underwent ovarian cortex transplantation. The results of this comparison show that there are no significant differences in live birth rates between both treatments.

According to Dr César Díaz, gynaecologist at IVI Valencia and one of the principal investigators of the study, “it is very important to determine the best treatment option for the patient, as not all patients may benefit from the same treatments”. Far from being the magic ‘bullet’, the common goal for both IVI and La Fe Hospital is to provide patients with all the tools and techniques available, to help individualise and adapt treatment, based on the needs of each patient.

In this respect, Dr Díaz considers that “if there is enough time before chemotherapy treatment begins, the patient has an acceptable ovarian reserve and if puberty has already started, the most advisable treatment is the vitrification of oocytes, since it is a less aggressive technique which offers the same live birth rates”.

The cryopreservation of ovarian tissue, though, would be recommended for prepubertal patients, who still have not had a menstruation cycle, and for whom undergoing ovarian stimulation and oocyte collection poses complications. It may not be indicated in certain aggressive tumours, such as Burkitt’s lymphoma cases, where there is not enough time for ovarian stimulation before starting chemotherapy treatment.

Thanks to studies like this one, along with further research, one of the key elements of IVI, patients are continuously provided with the best techniques and the highest level of comprehensive care to make the dream of motherhood come true.

Oocyte vitrification consists in stimulating the ovary using hormones similar to the ones naturally produced by the body in order to surgically collect the oocytes with a thin needle. The procedure is done under some sedation. After being collected, the oocytes are stored using ultra-rapid vitrification, which avoids damaging ice crystal formation, thus protecting them for as long as is needed (years or even decades). The same method is used for those patients who undergo fertility preservation to delay motherhood, for work or other personal reasons. After patients are cured from cancer, they could use those oocytes in order to fertilize them using their partner’s sperm or donor sperm, and produce an embryo that would be replaced in the patient’s uterus.

This method involves surgically removing a fragment from the surface of the ovary (through laparoscopy, a minimally invasive surgery). The procedure takes about 20 minutes, and patients are discharged home on the same day or they can even start chemotherapy treatment a few hours later. Then, the tissue obtained is frozen and stored for as long as required. For patients with ovarian failure, the tissue can be reimplanted during a new surgical procedure, thus allowing for the recovery of ovarian function, from a fertility point of view and the production of hormones (it would reverse menopause if it occurs as a result of chemotherapy). Likewise, it improves the chances of spontaneous pregnancy, with no need for In Vitro Fertilization treatment.