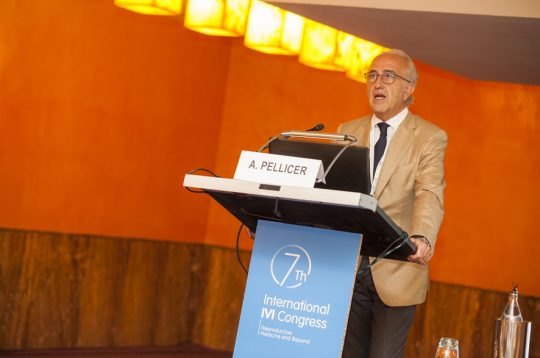 The trend of delayed motherhood over the last decades can be explained by several factors: social, work, economic, etc. But the reality is that biology does not always allow for this, as nowadays, the best reproductive time for women is when they are in their 20s, when not so many women consider motherhood yet. At that age, women produce the best oocytes, thus increasing the chances of a safe pregnancy that will result in a healthy baby. However, it has been estimated that premature ovarian failure –or early menopause- affects 10% of the female population who, despite the young age, would have problems to conceive.

In a study conducted in collaboration with La Fe Hospital in Valencia, IVI has achieved four pregnancies in women with premature ovarian failure through ovarian rejuvenation. This is precisely one of the research lines of IVI, which is directed by Prof. Antonio Pellicer, co-president and founder of the group: “We are envisaging new methods for activating those follicles that do not develop and the results so far are promising. This treatment gives cause for hope for patients who would otherwise not be able to conceive with their own eggs”, he explains.

Ovarian rejuvenation is one of the topics that will be discussed during the workshop prior to the start of the 7th International IVI Congress on Reproductive Medicine, which is being held in Bilbao, and has brought together renowned researchers such as the doctors Antonio Pellicer, Sonia Herraiz, Mónica Romeu, César Díaz and Konstantinos Pantos. Furthermore, one of tomorrow’s sessions will focus on this new line of research and will be given by Prof. Pellicer.

Successful ovarian rejuvenation, this is, the activation of follicles in premature stages, regardless of the influence of gonadotropins, is being researched by IVI through two techniques: Ovarian Fragmentation for Follicular Activation (also known as OFFA) and the infusion of stem cells into the ovarian artery.

Both techniques allow for a partial reversion of the aging process of the ovary, the organ of ovulation, and they activate the dormant follicles, which would otherwise stay in the ovary without maturing, not even with medication.

With the first technique, which is currently being offered at IVI Valencia as a the last resort option for patients with premature ovarian failure before undergoing egg donation, a sample of ovarian cortex is taken through laparoscopy, then it is fragmented and reimplanted. The procedure is often painless, and patients are discharged on the same day. The result of the surgery can be confirmed by a simple blood test to determine the changes in anti-Müllerian hormone, a marker for ovarian reserve.

The second method for ovarian rejuvenation involves the infusion of Bone Marrow-Derived Stem Cells (BMDSC) into the ovarian artery. This procedure forms part of a pilot study directed by Prof. Antonio Pellicer and his collaborator, Doctor Sonia Herraiz, in collaboration with La Fe Hospital of Valencia. The technique has also obtained promising results, as spontaneous pregnancies in women with low ovarian reserve after undergoing bone marrow transplant have been achieved.

On the first day of the IVI Conference, which will start tomorrow at the Euskalduna Palace in Bilbao, and will bring together more than 1,400 experts in reproductive medicine, Prof. Antonio Pellicer and Dr César Díaz will present the results of both techniques. Dr Aaron Hsueh will also join the session to present a new visualization technique of ovarian follicle growth similar to infrared images that allows to determine follicular size, location and shape.