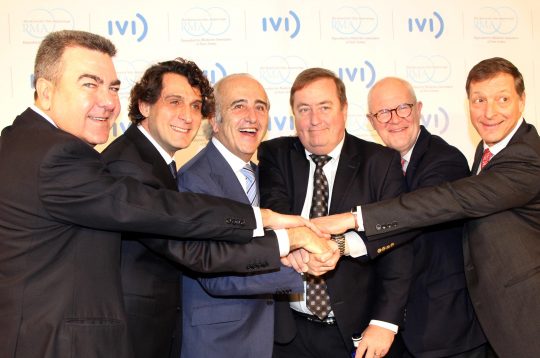 VALENCIA, FEBRUARY 16th, 2017
IVI has announced on Thursday their entry in the USA by reaching an agreement with RMANJ to merge both companies. The Presidents of IVI, Prof. José Remohí and Prof. Antonio Pellicer, accompanied by the Presidents of RMANJ, Paul A. Bergh, Richard T. Scott and Michael R. Drews have made public in a press conference this merger that consolidates IVI-RMA Global as the largest group of assisted reproduction in the world.

Following a year of negotiations IVI (Instituto Valenciano de Infertilidad) and RMNAJ (Reproductive Medicine Associates of New Jersey) have formalized the contract. After the merger of both companies, the group will reach around €300m revenues. IVI shareholders would retain a majority stake (approximately 70% belong to IVI and 30% to RMNAJ).

Prof. Antonio Pellicer commented: “I have known Dr. Scott for many years and we admire and respect each other. I have always pursued the goal of introducing my company in the USA and today I am pleased to announce that we have made it. The key to achieve this step was to go hand-in-hand with RMANJ. We share much the same medical-scientific and business values and interests. This merger will allow us to take full advantage of the expertise, experience and distinguishing elements of both companies for the benefit of our patients and employees”, explained Pellicer.

The experience of several icons (professors José Remohí, Antonio Pellicer and Richard T. Scott) of such a young and revolutionary science endorses this union. With ten clinics currently in the U.S.A., the initial objective of IVI-RMA Global is to continue its expansion in the United States. The sharing of expertise such as an awarded international innovation, unprecedented patient care, and unsurpassable success rates are the essence of this merger.

Prof. José Remohí declared that “after the merger with RMANJ we consolidate our position as the largest group of assisted reproduction in the world. Being in the USA is a dream that now has come true and we have achieved our goal hand by hand with RMANJ which has proved to be the best companion. RMANJ is one of the leading business corporations in reproductive medicine of the United States. This union will allow us to enhance our field of investigation, the fundamental pillar of IVI since its inception which has enabled us to achieve high rates of success, a fact that our patients value when choosing our services.”

The objective of both parties is to continue being leaders in the fields of research and scientific knowledge. The ultimate aim of this union is to share the best practices and the latest technologies in every phase of the various treatments offered, always for the benefit of our patients.

Dr. Richard Scott said that “as a single global entity, there are no geographical or any other kind of limits to our commitment to provide fertility solutions based on scientific evidence in order to offer the best chance of success in the shortest time possible. Last year, patients from more than 30 States of the United States and 40 other countries came to us in search of hope. Along with IVI, we can seek new markets and bring hope to all those patients who have problems with infertility.”

The merger between IVI and RMANJ has been performed under the legal advice of Garrigues Abogados (Spain/USA)/McDermott Will&Emery (USA) and the financial advice of Arcano Partners (Spain)/Dresner Partners (USA).