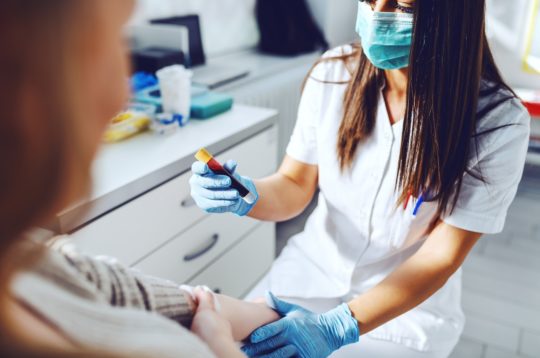 In recent times, the news is flooded with a topic that continues to dominate all areas of our lives: COVID-19 and the effects of its expansion. Concern and uncertainty are growing and, as a result, more and more research is being carried out in search of results that will provide certainty regarding this enigmatic reality. And the eternal question: Will we ever be free from it? Could factors such as blood type play a role in making people susceptible to the disease?

In this sense, a multicentre study recently published by IVI and presented at the latest edition of the ASRM (American Society for Reproductive Medicine) Congress, one of the world’s largest congresses on Reproductive Medicine, shows that patients with O positive blood group and Rh positive have greater protection against COVID-19.

“In the data analysed in our population in the post-confinement period from May to June, with a sample of 6,140 patients for SARS-CoV-2, we found that the incidence of disease (understood as patients who had positive antibodies, either IgM or IgG) was lower in patients with group O, with significant findings that the Rh-negative group was more frequent among those infected, contrary to what had been previously published.”, said Dr. Antonio Requena, IVI Medical Director.

“The positive rate does not vary significantly with age and no differences were observed in terms of gender or blood group. However, Rh-negative individuals were found to have a slightly higher risk of infection than Rh-positive individuals. In addition, in areas where the disease is most prevalent, the percentage of IgM-positive people is also high and there is an increased risk of infection when one partner is already positive”, added Dr. Requena.

The idea that blood type may have some prognostic value in relation to COVID-19 is interesting, although we are still at a very early stage in which it is urgent to first determine whether this association is real, as Dr. Christopher Latz, co-author of one of the most recent studies on this subject, points out.

What was previously known?

The first indication of the association between blood type and Coronavirus emerged during the SARS-CoV outbreak in 2002. The results of a first study published in 2005 indicated that patients with blood group O had a lower risk of infection than other groups.

15 years later, in a non-peer-reviewed paper, scientists from China reported a similar association between blood group and SARS-CoV-2; group O was found to be associated with a lower risk of COVID-19 infection, while group A had a higher risk of infection.

Investigations since then have not led to consistent findings.  In June, a group of scientists from Europe and Australia published the results of a study comparing the genomes of 1,610 patients affected by severe COVID-19 and 2,205 healthy blood donors. The researchers found that gene variants in two regions of the human genome were associated with a severe case of the disease and an increased risk of mortality. In addition, individuals with blood group A were found to have up to 45% higher risk of developing severe disease, while individuals with blood group O had a 35% lower risk.

Last July, Dr. Latz and his co-workers reported that they found no relationship between blood type and the severity of SARS-CoV-2 (Annals of Hematology). No significant correlation was found between the two factors on indicators such as hospitalisation, intubation or death. However, it was observed that Rh-positive individuals were more likely to test positive for COVID-19 than Rh-negative individuals, and that blood groups A or AB had a higher positive rate than group O.

In a non-peer-reviewed study published in April and updated in July, the results are in line with those of Dr. Latz. It is observed that Rh-positive individuals and blood group B had a higher rate of SARS-CoV-2 positives than group O. However, these data do not demonstrate a significant association between blood type and intubation and/or death among patients with COVID-19, and therefore, according to Dr. Latz, for now, blood type should not be used as a decisive factor in identifying an increased or decreased risk of developing severe COVID-19.