Susana: “I held on to the wild card of preservation for a chance of motherhood in the future” 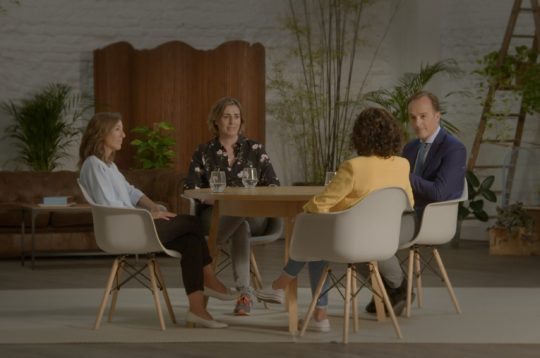 Breast cancer is the most common tumour in western women. In Spain alone, around 33,307 new breast cancers are diagnosed every year. Susana, Irene and Estrella, three women affected by this disease who won the battle against cancer, share their story to give strength and support to women who are in the same situation today.

Susana, a 42-year-old woman from Toledo, has been able to fulfil her greatest wish thanks to the free “Becoming a Mother after Cancer” Programme that IVI launched in 2007. The best reward for a hard fight to overcome breast cancer that stopped her life in its tracks 7 years ago.

“When I was diagnosed with breast cancer, straight away I thought: I’m dying. I was told by the radiologist from the Breast Unit of my hospital. And the moment she uttered those three fateful words, they went through me like daggers. Breast cancer… At that moment I stopped listening. She kept talking, but my world stopped dead. My parents, my sister and even some colleagues were with me. But time stopped around me and I just thought: Cancer, I’m dying I felt dizzy, tears fell uncontrollably down my cheeks, and the same thought tormented me”, explained Susana.

And, as she states metaphorically, she got off the train and focused on the phrase her radiologist said: “Just think it’s a bad year, with treatments, tests and so on”. Susana had only one goal: to survive.

“Cancer” is still a word that gives you a sentence, but which today, thanks to science, is not that gravestone that marks the end.

Susana’s case was surrounded by chance circumstances. At 36 years old at the time of diagnosis, and with no children, she had to rethink the course of her life and fight, as she so rightly says, for that wild card to be able to become a mother in the future.

“Fortunately or unfortunately, it took me much longer to channel the issue of motherhood through the unit that treated me. The radiologist, surgeon, plastic surgeon and oncologist outlined the steps to follow to stop my cancer as soon as possible. But the option of being a mother in the future was not considered at any time. And almost by chance, all of a sudden, all my warning systems switched on: And what if I want to be a mother? I am me, first person, a woman, and for me it was important to be a mother. I was lucky enough to meet a person who had done their Biology internship at IVI, and they told me about the options you offered for women like me, with a hard battle to face and a desire that I refused to give up”, she added.

Thanks to this, 7 years later, Susana is a new mother of a 4-month-old baby named Manuel.

“When the ban is lift and your oncologist gives you a clear path, it is very moving. You enter IVI with a different colour, you experience everything intensely, and when it becomes a reality it is like magic. Modern facilities, the best technology, state-of-the-art in many things, but the care is really good, personal, involved in every step of the process. I was a person to them, not a number as you might think with a company of this size. IVI gave me back the hope to see that there is a social project that its whole staff experiences and shares. It has a team of professionals backing it up, who take care of you with kindness; it is a sure bet. And the fear is there, but when you see the ultrasound, you see how it grows and how it evolves, the fear disappears. Motherhood is an energy that transcends, a power that can tackle and fight against everything. And when the baby comes, they wake up in the morning and smile at you and look at you as if they were looking at God, you are moved and everything makes sense. Something that you have fought for for so long and that you have right there in your arms. The greatest gift”, she concluded.

Like Susana, Irene and Estrella, more than 800 women have vitrified their eggs at IVI, within its free programme for cancer patients. As a result, 29 babies have already been born after their mothers won the battle against cancer, and 7 more are on the way to join them.

Irene and Estrella are moved listening to Susana’s words with a certain degree of yearning. They are still waiting to be discharged to be able to set off on their path to motherhood with the same courage with which they have overcome their breast cancer. For all of them, the future hope of becoming mothers has filled them with the strength to face the giant called cancer.

Fear, worry, uncertainty, doubts, hundreds of doubts and the immense desire to become mothers united them with a single purpose: to cling to life.

And IVI made it possible for the first children in the world to be born from vitrified eggs of cancer patients. Knowledge and experience available to social initiatives such as this, which result in wishes becoming a reality.

Can preserving my fertility make my cancer worse?

Patients diagnosed with cancer who attend an assisted reproduction consultation to enquire about egg preservation are obviously scared. They worry about the time and complications that may be caused. But the truth is that neither time nor complications are a problem nowadays.

Data published on the follow-up of patients who have been stimulated to freeze eggs show the same survival results as those who have not. Ovarian stimulation to obtain eggs to vitrify does not affect the evolution of the cancer, and more so when at all times you collaborate with the oncologist to adjust the process and the medication to ensure it does not influence the subsequent treatment that the patient will receive. The protocol is perfectly defined for each case.

Egg vitrification is a window of opportunity that cancer patients can take advantage of to have a future wild card to become mothers.

And, lastly, the eternal question arises: What are the chances of this working for me?

The results are always linked to the age at which the eggs are frozen. The younger the patient is at the time of vitrification, the more future possibilities she will have of being able to become a mother with her own eggs.

Strength, support and energy, there is hope after cancer

Susana, Irene and Estrella dedicate a few words to women who, like them, are going through one of the most difficult times of their lives: their fight against breast cancer:

“Be strong, fight, you are not alone. Keep going because you have many chances”.

“Never stop smiling or think that you will not beat this. Don’t stop fighting, your life is waiting for you. This is only a parenthesis and you should not give up any future plans”.

“Cry today. But from tomorrow accept it for now and move forward. It is a bad year, but you will get through it”.