Treatments with donated embryos triple in the last decade 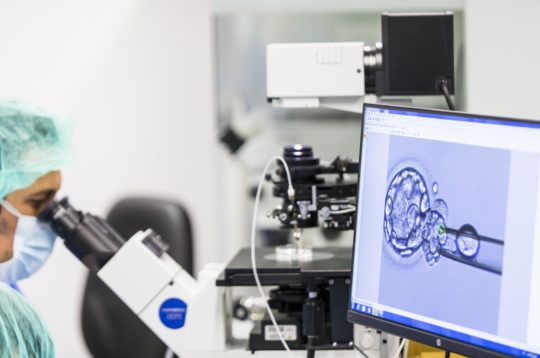 Embryo donation makes the dream of becoming parents true for women and couples who cannot become pregnant with their own gametes. In the last decade only, fertility treatments involving donated embryos carried out at IVI increased threefold, from 117 embryo donation procedures in 2009 to 370 last year, in 2018.

58% of these were performed on patients from Spain, but it is true that women and couples from abroad come to IVI in search of reproductive solutions not feasible in their home country due to legal restrictions, as in the case of embryo donation.

“Patients from Italy, Germany, France and Great Britain represent 33% of the treatments with donated embryos performed at our clinics in Spain. The majority of them are older than 40, so their chances of conceiving with own gametes are limited or non-existent. If you add the legal limitations imposed by their home country and their strong desire to become mothers, no wonder they see the liberal Spanish law as a tempting option,” explains Dr Ernest Bosch, the medical director of IVI Valencia.

By law, the woman or the couple have to choose between the three available options regarding the fate of their surplus, cryopreserved embryos: donation to other women or couples, donation for scientific research or their disposal (having signed an informed consent).

“Despite the fact that the usual recipient profile is represented by heterosexual couples, it is noteworthy that the number of single women over 40 who decide to face maternity alone, choosing embryo donation due to the age factor and their state of fertility, increases gradually. Currently, this patient group constitutes 37% of the treatments with donated embryos at IVI”, adds Dr Bosch.

When the desire is stronger than prejudice

On most occasions, women and couples experiencing fertility problems, which make it impossible for them to become parents using their own gametes, must go through an acceptance process.

“Every day in our office we see patients in grief and our job, from the psychological and emotional perspective, is to accompany them and show them how to overcome this process. Time, empathy, understanding and support are the key pillars which lay the foundation for our therapy and help us to share the harshness of some diagnoses with our patients and look for the best alternative to fulfil their dream of becoming parents. Not only then, but also throughout all the stages of the process, it is the psychology unit´s fundamental task to make our patients´ experience as comfortable as possible”, explains by Pilar Dolz, Head of Psychological Support Unit at IVI Valencia.

It is particularly applicable in the case of embryo donation, as these women and couples are faced with a quandary about whether to renounce their ideal of mother/fatherhood. “Many patients come to our office with a big moral dilemma. The idea of having a child who does not possess their genes gives them a certain irrational sense of rejection. But the truth is, motherhood is much more than genetics. Motherhood is biology, evolution, emotions, hormonal changes, epigenetics…”, adds Dolz.

Before choosing a treatment involving donated embryos, it is crucial that the patients get through the process of understanding and accepting that they will not become pregnant with their own gametes, addressing any issues that this situation may pose. To help them do it, IVI has a psychological support unit in all the clinics at their patients´ disposal, accompanying the patients throughout the entire reproductive process.

For years now, IVI researchers have been studying the way the molecules secreted by a mother´s endometrium may modify the embryo, influencing its future physical and even psychological features. The science devoted to analysing these processes is called epigenetics and it deals with non-genetic factors which intervene in an organism´s development, modifying the activity of the DNA without altering its sequence.

“Epigenetics seem to demonstrate that not only the inherited genetic material of the donated gametes affects the development of the fetus, but so does, to a large extent, the uterine environment which in change makes the fetus resemble the parents”, says Dr Bosch.

These scientific advances open up new avenues for breaking down many taboos some patients still have today when it comes to accepting a treatment involving donated gametes.