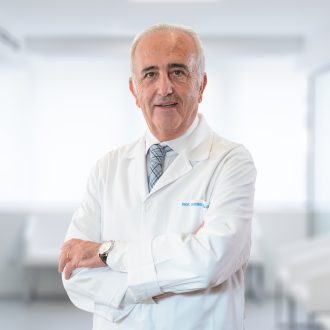 He studied medicine at the University of Valencia, earning his Medical Doctor Degree in 1978.
He obtained his PhD in 1980 by the same University and earned his residency of Obstetrics and Gynecology at the Hospital Clínico of this city, and the subspecialty of Reproductive Medicine at Yale University School of Medicine (USA), and at Mainz University (Germany).

Professor Pellicer founded the Valencian Infertility Institute – Instituto Valenciano de Infertilidad (IVI) in 1990, and his work in the reproduction field has conducted to create several IVI clinics both in Spain as well as internationally.
He is also Chairman of IVI Foundation for the Study of Reproduction and Chief Director of IVI Team.

Professor Pellicer has been honoured with several prizes for his contribution to the reproductive health field, where must be highlighted the followings: the American Society for Reproductive Medicine has conceded him for seven times the Annual Meeting Prize Paper, the XXV Society for Gynecological Research President’s Award 2002, Rey Jaime I Prize in the modality of Clinical Medicine granted by the Rey Jaime I Foundation Awards in Valencia in 2004, Golden Medal Imposing Prize by the Official School of Doctors of Valencia, in Valencia 2006, ROTARIAN FLAME Award: of SCIENCES 2007, in Valencia 2008// and Lily Foundation Prize of Clinic Biomedical Research 2008 granted by Lily Foundation in Madrid, 2008.
He has been recently named Honorary Doctor by the Polytechnic University of Valencia in Gandía, Valencia, 2001.

Professor Pellicer is a member of the ESHRE Executive Committee (European Society of Human Reproduction and Embryology) and from the International Federation of Fertility Societies.
He has been President of the Spanish Fertility Society during the years 1994 and 1996 and he is currently member of the National Commission of Human Assisted Reproduction.
He has written more than 200 chapters of books and has published more than 650 articles in national and International journals and has presented more than 400 conferences in national and International congresses.
He is Co-Editor of the Fertility & Sterility Journal and is member of the editorial boards of several scientific societies.