IVI achieves through assisted reproduction the birth of HIV-free babies 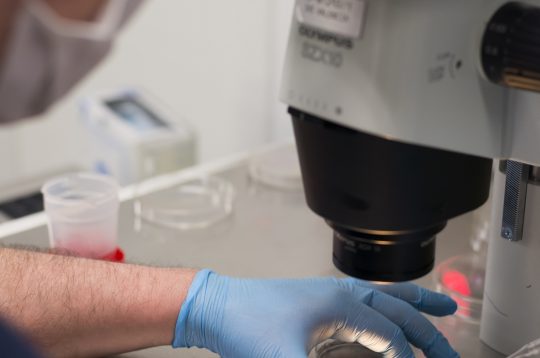 Like every year for over three decades, the first of December we have to talk about AIDS as the great epidemic of our time, a transmissible disease that affects a portion of the world’s population, and which is particularly fierce in less developed countries

Research represents an essential role for its eradication, as reflected in the improvement in the quality of life of persons infected with the virus, thanks to the progress made in the treatments, among other things. Despite the multiple advances and achievements so that infected people can make their life as normal as possible, problems continue to arise today, such as for example, the moment to seek a pregnancy within a heterosexual couple. It is in this context where programs such as the sperm washing, developed by IVI clinics, take a particular relevance, and that for more than a decade have succeeded in ensuring that children with seropositive parents can born free of disease through the assisted reproduction.

“Thanks to the improvement in the development of antiretroviral treatments and to the assisted reproduction techniques, serodiscordant couples where the male is infected with HIV, can make the dream of being parents come true in a safely way for the partner and their offspring. Sperm washing, confirmed by high sensitivity molecular biology techniques and followed by an assisted reproduction treatment such as the intracytoplasmic injection (ICSI), make the optimal protocol to reduce the risk of virus transmission in a cost effective and safe manner”, remarks Dr. Rocío Rivera, Director of the Laboratory of Andrology of IVI Valencia.

When the woman is the carrier of the virus, the assisted reproduction treatment employed does not differ very much from that applied to a woman free from the virus. As explained by Dr. José Bellver, gynaecologist in IVI Valencia clinic.

The assisted reproduction treatment, in case the woman is the carrier of the virus, does not differ very much from the one applied to a woman free of virus. As explained by Dr. José Bellver, gynaecologist of IVI Valencia, “a strict immunological control of the patient is essential and that the treatment is performed when the viral load is very low or undetectable. Special care and control of the infection must be taken at the third trimester of pregnancy and during childbirth, although the risk of infection is lower thanks to the antiretroviral treatments. Thanks to the new techniques developed we have helped couples with hereditary transmissible diseases to form a family. What appeared impossible before, we can now consider it as a landmark for the normalization of the disease.

HIV Epidemiology at present
According to the data provided by the United Nations program ONUSIDA of this month of November, approximately 36,7 million of persons were living with the HIV virus in 2015. Despite the fact of still being a high figure, this represents a decrease of 35% of new infections since the year 2000, and a 42% drop in AIDS deaths. Apart from this, according to the figures provided, nearly 18 million people already have access to antiretroviral treatment, which represents an increase of 84% in comparison with 2010.