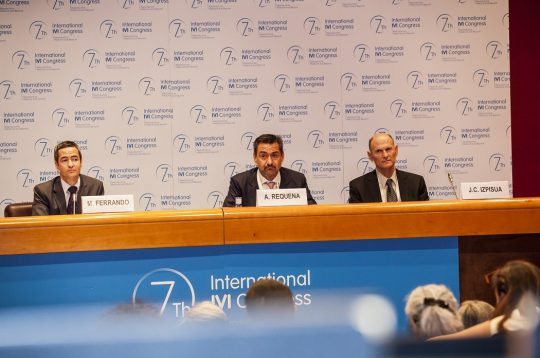 The Palacio Euskalduna in Bilbao was the setting today for the official press conference of the 7th International IVI Congress on Reproductive Medicine, a biennial event that is already celebrating its seventh edition. More than 1400 attendees from 72 countries have come together this week in the capital of the province of Biscay. Valencia, on two occasions, Madrid, Seville, Alicante and now Bilbao are the cities that have played host to the International IVI Congress, one of the top events in reproductive medicine around the world.

The press conference featured three eminent protagonists: Antonio Requena, Medical General Director of IVI, Marcos Ferrando, Director of IVI Bilbao and Juan Carlos Izpisúa, a Professor at the Salk Institute in San Diego and one of the recipients of the 7th International Fundación IVI Award, alongside Magdalena Zernicka-Goetz and Richard Legro.

Dr Antonio Requena, Medical General Director of IVI, emphasised the importance of this conference: “Every year sees increased attendance at a congress that we design thinking exclusively of the professionals who visit us. This year we have 1400 specialists in reproductive medicine, 600 from Spain and 800 from the rest of the world. Research is one of the fundamental pillars of IVI, and it is from this that the importance of bringing together the best in the world in our field and sharing all of our knowledge arising from research stems. In addition, on Wednesday we had the chance to organise a pre-congress course with more than a hundred participants.”

Dr Marcos Ferrando, President of the Congress and Director of IVI Bilbao, expressed his pride in Bilbao being the headquarters of reproductive medicine for a few days. “The 7th International IVI Congress provides a platform for exchanging experiences and the results of research. At present, the great challenges in reproductive medicine are ovarian rejuvenation, immunology and the preservation of fertility and it is precisely these themes that will be central to this summit,” he said, adding, “It is no coincidence”.

Also speaking at the press conference was Juan Carlos Izpisúa, one of the most highly reputed researchers into rejuvenation in the world, and whose advances have deemed him deserving of the 7th International Fundación IVI Award. “Achieving recognition such as this from your own colleagues is extremely satisfying and shows that it is crucial to invest in research, not only so that we can provide the best possible assisted reproduction today, but also in the future,” stated the specialist, who will tomorrow give a paper on the potential of gene therapy in slowing down ageing and in curing congenital diseases. Magdalena Zernicka-Goetz and Richard Legro will also receive this award during the congress’s gala dinner this evening.