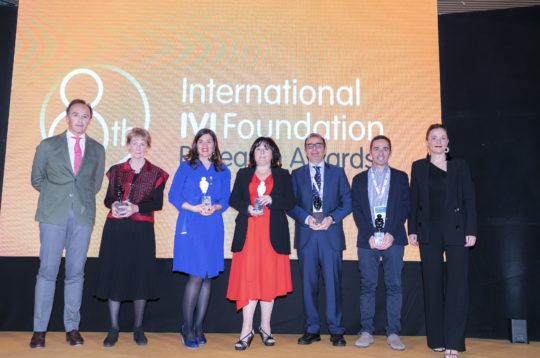 The eighth edition of the congress that IVI organizes every two years has come to an end, and it does so by acknowledging the scientific and journalistic work of great professionals who have marked the evolution of reproductive medicine in different specialities.

In the scientific area, the IVI Foundation has given awards to the international researchers Nuno Costa-Borges, Ashley Moffett and Manuel Tena-Sempere. Whilst in the journalistic area, the work of Sonsoles Echavarren and Pilar Arranz, both Spanish media journalists, has been acknowledged. All the awards have been presented within the framework of the 8th International IVIRMA Congress by representatives of IVI and MSD –one of the largest Pharmaceuticals companies in the world–.

The scientific award granted by the IVI Foundation has two categories: basic research and clinical research in reproductive medicine. The prize, which is valued at €50,000, is based on the aim of highlighting the importance of scientific contribution to assisted reproduction, acknowledging the researchers and their teams for their help in broadening the scientific and clinical horizons to improve treatments and techniques used in the reproductive sector in the future.  The award is also acknowledges the professional career of the doctors and their contribution to research.

In this context, Professor Ashley Moffett won the award for the best career in clinical research of groups of excellence in reproductive medicine, while Professors Nuno Costa-Borges and Manuel Tena-Sempere received the award for the best basic scientific research career of excellence in reproductive medicine.

For the occasion, the awards jury was formed by leading personalities of research and medicine, such as Prof. Empre Seli, Scientific Director of IVI, Prof. Antonio Pellicer, Co-President of IVI and Co-Editor of the prestigious magazine Fertility & Sterility, Prof. Nicolás Garrido, Director of the IVI Foundation, Dr. Hugh Taylor, Head of Obstetrics and Gynaecology at Yale-New Haven Hospital (U S), and Dr. Jacques Donnez, from the Catholic University of Louvain and the  Society for Reproduction Investigation (SRI).

As for the winners, we can highlight that Prof. Ashley Moffett has developed her research focusing on the cellular interactions that occur between maternal uterine cells, especially immune cells, and placental trophoblast cells that invade the mucous membrane of the uterus in the first trimester of pregnancy.
Dr. Moffett has been at the forefront of immunology research for more than 25 years and is currently focusing on the interactions between KLA (killer-cell immunoglobulin-like receptors) and foetal HLA-C molecules, the culture of human trophoblast cells and the link between KIR/HLA-C variants and puerperal preeclampsia, sepsis and obstructed labour.

Prof. Nuno Costa-Borges is a researcher and embryologist who has been dedicated to research and clinical practice for more than 15 years, achieving the first successfully cloned animals in Spain in 2009. He has been dedicated to the development and improvement of new reproductive techniques, such as the flicking method, allowing blastocyst biopsy, or meiotic spindle transfer to prevent the transmission of mitochondrial diseases or to overcome infertility problems related to poor quality of the oocytes. Recently, his research has focused on the development of new strategies to rescue chromosomal aneuploidies in older oocytes. The work of Dr. Costa-Borges has been reflected in numerous scientific publications and has earned him prestigious national and international awards, including the one he is receiving at the 8th International IVIRMA Congress.

For his part, Prof. Manuel Tena-Sempere is a Doctor of Medicine and Professor of Physiology at the Department of Cellular Biology, Physiology and Immunology at the University of Córdoba. His research experience focuses on the field of Neuroendocrinology of puberty, reproduction and metabolism. In particular, it has recently focused on the hormonal and molecular mechanisms of puberty control and functioning of the reproductive system, with important findings in this field. He is the author of numerous publications in international journals and his work has earned him the recognition of much of the international scientific community.

The IVIRMA Media Awards on Assisted Reproduction and Maternal-Foetal Health have been presented by Marián Garriga, Global Director of Marketing and Communication of IVI. In their second edition, the call for these awards has been extended to all countries worldwide, although finally the papers selected as winners by an independent jury, composed of different journalism figures, were of Spanish authorship.

With an amount of €3,000 and a statuette representing the Venus of Willendorf as a symbol of fertility, the journalistic excellence of both professionals has been recognized in the dissemination of information on reproductive medicine.