Through participation in a multicenter clinical trial, IVI has proved the effectiveness of SwimCount, a home test that measures male fertility 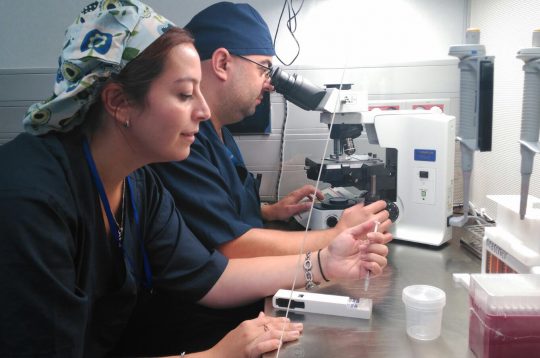 SAN ANTONIO (USA), OCTOBER 2017
IVI, global leader in assisted fertility treatment, has participated in a multicenter clinical trial that has proved the effectiveness of SwimCount, a home test that assesses male fertility. The study has been presented at the 73rd Annual Meeting of the American Society for Reproductive Medicine, which is being held in San Antonio (USA) and brings together Specialists in Obstetrics and Gynaecology from around the world. The clinical trial has been conducted by IVI in partnership with the Acibadem Fulya Hospital from Turkey, the Danish sperm bank Nordic Cryobank and the fertility clinic Ciconia, from Denmark.

In its compromise to make the dream of having a baby come true for as many people as possible, IVI wanted to participate in this clinical trial, which represents an improvement in both the diagnosis and treatment of male infertility. A total of 323 sperm samples from patients were analysed by comparing the conventional microscopic semen analysis results with those obtained by the home test in order to determine that the test offers 95% accuracy, which shows a high level of reliability. The test is available for sale in several countries.

“SwimCount entails a revolution for the early diagnosis of male infertility, which is the cause of a 40% of all infertility cases. Female fertility issues account for another 40% and the other 20% is due to unknown causes”, states Dr Marcos Meseguer, Scientific Supervisor at IVI Valencia and collaborator of the study. “We shouldn’t underestimate the importance of the male factor in reproduction and for that reason, a test like this, that allows men to obtain a reliable answer and diagnosis from the convenience of their homes, represents great process”, explains the specialist, who also reminds us that advanced age is a risk factor for infertility, also for men.

Home tests for male fertility, thus far, had assessed sperm count only and not sperm quality, even though other factors, such as progressive motility –the ability to swim in a straight line- is required for successful fertilization, since it only takes one sperm cell to fertilize the egg. SwimCount is the first home test that measures this variable, hence offering earlier comprehensive diagnosis. For this reason, it is recommended to see a doctor for further testing and investigation if a low result is obtained.
A semen analysis is the most common male infertility testing procedure used by fertility clinics. The test involves the microscopic examination of a sperm sample to assess certain sperm parameters such as morphology –to detect sperm abnormalities such as double-headed or double-tailed sperm–which, to date, home tests are not able to detect.

How Does the SwimCount Test Work?

After collecting a small sperm sample in the device, the progressive motile sperm cells (those not swimming in circles) will have stained blue. This way, the more motile sperm in the sample, the stronger the blue colour will be, after 30 minutes following sample collection.

Sperm fertility is measured according to World Health Organisation parameters, who defines fertile sperm as a sperm count of more than 10 million of motile sperm per millilitre. Low sperm count make it more difficult to conceive naturally after one year of trying for a baby.